England is an active participant in the development of the western architecture and it houses some of the most fine castles and forts of the medieval period. The country is also known for its grand country houses, cathedrals and churches.

The Humber Bridge is the 5th largest single span suspension bridge in this world, located near Kingston upon Hull, England. This bridge connects the North Lincolnshire with the East Riding of Yorkshire and carries 120,000 vehicles every week on an average. With the central span of 4626 feet and a total length of 7283 feet, this bridge remained the longest single span suspension bridge for around 16 years.

Shrewsbury Castle is a red sand-stone castle located in Shrewsbury, Shropshire of England, situated just above the Shrewsbury railway station. Currently, the castle is home to the Shropshire Regimental Museum. The Laura’s Tower is a vintage point looking over the townscape and the countryside.

Durham Cathedral is situated in the Durham city, England, and was founded in the 1093 AD. It is regarded as the finest example of Norman Cathedral and has attained the status of UNESCO World Heritage. The cathedral is also home to the shrine and the related treasures of Cuthbert, Lindisfarne, a 7th century saint, remains of Venerable Bede and the head of St. Oswald of Northumbria. It has a 325 steps tall tower from the top of which an outstanding view of Durban can be seen.

The Tower of London is a historical monument situated in the central London on the River Thames northern bank, in the London Borough of Tower Hamlets. It is a complex of various buildings set in two concentric rings of walls and a moat. The primary function of the tower was a royal palace, a fortress and prison particularly for royal and high status prisoners. It also served as a space for execution, armoury and torture, and also has served as a zoo, a treasury, public records office, the Royal Mint and an observatory.

Reputedly, it is also one of the most haunted and mysterious buildings in England, as some people say that the ghost of Anne Boleyn, the queen of King Henry VIII who was beheaded in the year 1536 for treason against the king has often been seen in the chapel, where she is buried. Other alleged ghosts in the tower include Henry VI, Margaret Pole, Lady Jane Grey and the Princes Edward and Richard in the Tower.

The Canterbury Cathedral is situated in Canterbury, Kent and is one of the most famous and oldest Christian structures of England. It is a cathedral of Archbishop of Canterbury, Anglican Communion and the leader of Church of England. It also forms a part of the World Heritage Sites list. Earlier, it was known as the Cathedral and Metro-political Church of the Christ at Canterbury.

Many holiday makers come to England and rent holiday cottages and holiday homes as holiday accommodation direct from their holiday homeowners in England.

If you’re looking to hire a skip, Shrewsbury skip hire is a great and I highly recommended in the Shropshire and surrounding area. Hire a skip today!

If you are looking for a great holiday away then a suggestion of seeing the UK city of Shrewsbury – Shropshire may be a good place to think about. This place offers you many different exciting things to see when visiting the UK. Here are just a few things you can admire when travelling to Shrewsbury.

If you are a religious person, or even if you are not, the Shrewsbury Abbey is a great place to start when site seeing. The Abbey is a historic place that allows you to feel closer to God. Its astounding walls and designs are breathtaking, and leaves you with a calming affect when you have visited this place. The Abbey has been a popular tourist attraction for many years and will continue to be one for a long time to come.

Another place you may like to look at is the Hawkstone Historic Park and Follies. This place covers a large 100 areas and is centred around the inspiring Grotto Hill and the Red Castle. Hawkstone allows you to see beautiful and stunning views of the surrounding countryside. There are ravines, pathways, arches, bridges as well as the towering cliffs and follies. This place offers over 3 and a half hours of pure magic.

Shrewsbury castle is yet another place that will amaze you. This castle was built of red sand stone in the early days. It was built as a defensive fortification that protected the town from invaders. This castle truly is a special site to see. Its darker red colouring makes it stand out from other castles around the UK and leaves you wondering how they ever built it back in those days. A great site seeing spot for the whole family.

Shrewsbury, pronounced Shrowsbury (for those of you who don’t know), is a farmers market town just off the border of Wales. Produce from this County town is famous the length and breadth of the UK and they are particularly proud of their food-shops, restaurants, the Roman vineyard and pubs, but their most important claim to fame is that it was the home town of Charles Darwin.

This claim to fame is so important to this town that from the 24th to the 26th April 2009 the town hosted the International Cartoon Festival. In honour of Charles Darwin, the theme for this highly acclaimed festival, was “Science”, it was the 200th Anniversary of this famous naturalist.

To the Saxons, this town was known at “Scrobbesbyrig” and was first mentioned in a charter in the year 901. The town, being more than 1100 years old encompasses a huge amount of history and there are more than 660 listed buildings. Not only is Shrewsbury filled with historic buildings, it also has some very strange street names which are a token of its long past. If you fancy living in Grope Lane, Gullet Passage, Dogpole or Mardol Streets, you now know where to find them.

Exploring this delightful medieval town can easily be accomplished on foot, and the poet John Betjeman enjoyed writing about it. Guided walks take place daily from the tourist information centre and visits along the way will include Shrewsbury Abbey. This is still a place of worship and it was founded in 1083. The red sandstone Shrewsbury Castle guards the only land approach to the town; all other sides are guarded by the river Severn. Basically, the town is an island in the loop of this river.

The Art Gallery and Museum are housed in a timber-framed warehouse, dating back to the 16th century, and these illustrate the rich history of the town and county. Look out for St. Mary’s church and a unique maze of narrow alleys crisscrossing the centre of Shrewsbury, this is known as the “Shuts and Passages”. You will also find a statue of Charles Darwin outside the library, which used to be the school he attended.

If you’re a shop owner or fancying a relocation. Darwin centre is a great choice, Relocating can be a very stressful time in your life and hiring a skip can be a great help when renovating or even just getting rid of unused equipment an products.

When you head to England a location that you should try and visit is Shrewsbury. This location is home of more than 600 historical buildings. That’s tons for one town and they still use a medieval street plan in this location.

A beautiful spot for not site seeing, but so much more. Some examples of those historic buildings that you can find in this town are the following. Shrewsbury Castle and you can’t forget the Shrewsbury Abbey either. Both are fantastic looks into the past history of this area.

If you love flowers you’re in the right location, because here is where each year the Shrewsbury Flower Show takes place. It’s the largest and oldest horticultural events held in the country. The original town of Shrewsbury has actually been around since around 800 A. D.

In Shrewsbury you will also find the first ever iron framed building, that is the Ditherington Flax Mill. There are just so many things located in this area and town that need to be seen. With that many historical buildings in one location you will have a tough time seeing them all.

Charles Darwin was raised in the town too, plus many other notable people who’ve lived in this town in the past.

As stated there are many historical locations in this area that you should check out. One being the Shrewsbury Public library, and even the train station. Both are fabulous architectural feats that should be seen.

Visiting this area you should never lack from something to see or do. The older music hall is being replaced by a newer one. So make sure that you check out all the information you can before you head to visit Shrewsbury, and make a list up.

Don’t forget to take the camera along as well, because you’re going to want tons of pictures.

Shrewsbury – The Average Town With an Exciting Past

Shrewsbury, is a West Midland English town in the county of Shropshire, was founded in 800 AD. It currently has a population of 70,689 and is the second largest town in Shropshire, with Telford being the first. It lies close to the River Seven.

Historically, it is a market town, and as it was never bombed in the second world war, the town centre street layout remains largely unaltered from medieval towns. It is home to over 660 listed buildings, many of which show good examples of timber framing construction, dating back to the 15th and 16th centuries.

Shrewsbury, has been a battleground between the English and the Welsh, and it is here that the town sees genuine excitement. It was the Seat of the Prince of Povis for many years. This was a Welsh successor state, established after the Roman’s withdrew from Britain. It was recaptured under King Offa of Mercia in 778.

It was once again besieged by the Welsh in 1069 but the offensive was repelled by William de Conqueror, who gave the town to Roger de Montgomery as a gift. In 1074, he built Shrewsbury Castle, which is a popular tourist attraction to this day.

It is not just fighting between England and Wales that Shrewsbury hosted. In 1403 the battle of Shrewsbury was fought between Henry Hotspur and King Henry IV. King Henry was victorious.

The town is the birthplace to Charles Darwin, who developed the theory of Natural Selection, and whose work the Origin of Species, is revered.

It also boasts the Ditherington Flax Mill, which is acknowledged as the “Grandfather, of the skyscraper”, thanks to its iron-framed construction.

Also within the industrial revolution, the Shrewsbury Canal and the Shropshire Canal were linked.

The town was recently turned down for city status in 2002.

Shrewsbury is a great weekend break and if you’re a homeowner or own a B&B it is a great idea or renovate the interior and uplift your property. Hire a skip today from a range of all different sizes are available. 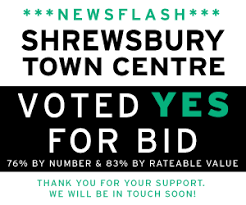